Technology and society at automated borders : risk of discrimination and fundamental rights 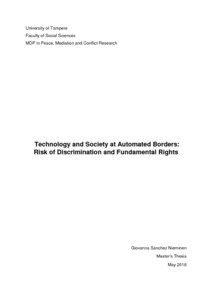 The European Union border control system has been under a series of transformations to better adapt to domestic and international pressures. New border technologies are in the centre of these transformations. Technological solutions, such as electronic gates, biometric identifiers and large-scale data systems are currently being implemented for the improvement of the system efficiency and security.

The present master’s thesis is a contribution to the European Union Horizon 2020 research project named “BODEGA- Proactive Enhancement of Human Performance in Border Control”. It focuses on the recent transformations of the European Union border control system, which are leading to an increasing automatization of its tasks. The implementation of new border technologies is spreading around the Union external borders, without proper assessment of social and ethical impacts. The aim of this research is to investigate how new border technologies are affecting and can affect fundamental rights, particularly the right of non-discrimination.

The research has been conducted with the analysis of survey questionnaire’ responses given by travellers who recently crossed the Schengen border, in addition to the analysis of the results of a public consultation on the Smart Borders, which counted with the participation of European public authorities and organisation related to migration, border control and fundamental rights.

Research findings demonstrate that one of the greatest challenges of the European Union border management system is to reconcile humanitarian and security aspects in the performance of its common tasks. Furthermore, the findings indicate that the form in which technological solutions have been designed and implemented can reduce the likelihood of some discriminatory practice occurrences, but it can also potentially increase the likelihood of others.