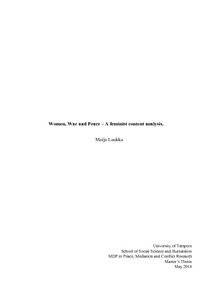 Throughout history war has commonly been associated with the actions of men and the victimhood of women. The objective of my thesis has been to identify alternative roles and experiences of civilian women’s in the face of war and peace. Hence, I have also by applied also the concepts of practitioners and empowerment to my study in addition to the dominating discourse of that women are passive victims and targets as well as the impression that war and peacebuilding only affect men.

The research material for analysis in this study is based on the “Women, War and Peace: The Independent Experts’ Assessment on the Impact of Armed Conflict on Women and Women’s Role in Peace-building” by Elisabeth Rehn and Ellen Johnson Sirleaf published in 2002. I have examined the research material using the systematic literature review as part of the content analysis methodology. The systematic literature review is considered to be an effective tool when the research goal is to deepen the knowledge of already existing information or phenomena.

Throughout the analytical chapter of my study my intension is to exemplify women’s experiences and different roles women have in the context of war and peace as well as to describe elements which enables empowerment. To understand the complex context of my study I have illustrated the theoretical frame of feminist research by using the gender lenses approach. By looking at different global issues through gender lenses we can dispel misconceptions about the world, focus on gender as a particular kind of power relation and to trace out the ways in which gender is central to understanding international processes. According to Jill Steans gender lenses focus on the everyday experiences of women as women and highlight the consequences of their unequal social position.

Generally, women are characterized as helpless and in need of protection, especially in the context of armed conflicts. In stead of biological factors this vulnerability is more a consequence of patriarchal, cultural, social and political causes. Altogether, women do not have the same resources, authority and political rights to meet their personal needs or control their environments as men. Despite the horrors women are facing in conflicts, the research material also highlights that women in conflict areas have not given up hope of transformation. Even though women have been practitioners on the grass root level in solving conflicts, women are almost completely missing from official peace negotiations and peace agreements. Exclusion from reconstruction processes restricts and limits empowerment of women. To be able to recover from conflicts women should be provided the possibility to gain justice for human rights violations and sexual violence and to participate in shaping egalitarian societies.