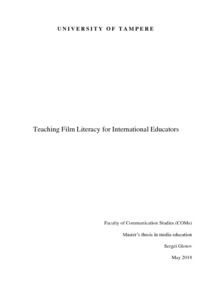 The influence of film is continuously growing, despite of that, film is rarely studied on its own. The research to data has focused on using film instructively, presenting it as an audio-visual tool for learning various disciplines. However, this approach does not stimulate understanding of film or, in other words, development of film literacy.

This action research is based on Film Literacy Course conducted in University of Tampere, Finland during Summer School 2017. The course had 12 students from various countries. The research data is drawn from three course assignments and the research diary. The thematic analysis was used to review, analyze and synthesize the results. The findings revealed that during the course students developed critical thinking, extended cultural knowledge and broaden practical and theoretical knowledge about filmmaking. These learning outcomes justify film literacy education approach and teaching practices that were adopted for the course.