The transportation of animals by air : a case study on international agreements and Lufthansa 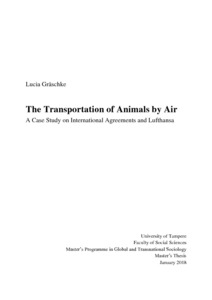 In the modern world, non-human animal life is increasingly regulated by legal rules. Many of these rules circulate globally. Despite the growing number of animal studies in the field of social sciences and sociology, the impact of globalization on non-human animal life has received little attention.

This study contributes research to the intersection of globalization and animals, by exploring how local and international soft law regulations organize the transportation of animals by air. The study will analyze how international agreements regulate the business of animal transportation by air, as an example, of governance beyond the nation-state. In detail, this study explores how internationally set agreements without binding legal force, here referred as soft law documents, construct authority, and how the local actor Lufthansa exercises power to position itself as an expert in the field of animal transportation by air. Furthermore, the study looks at common rules which organize the transportation of animals, as well as their local modifications.

Four international agreements — the Live Animal Regulations of the International Air Transportation Association, the Terrestrial Animal Health Code of the World Organisation for Animal Health, the Council of Europe Convention on the transportation of animals, the European Union Regulation 1/2005 — and 24 documents published by Lufthansa have been analyzed using a qualitative content analysis as a method.

Using the theoretical concept of soft governance, the analysis identifies that authority of soft law documents has been constructed by cross-references between the soft law documents. Furthermore, the local actor Lufthansa exercises epistemic work to manifest its position as a professional expert in the field of animal transportation. All documents agree on a set of rules, which organize the transport of animals. Together these rules create a template which ensures the successful transportation of animals. Apart from following the rules of this template, the local actor Lufthansa, further, modifies guidelines of the international agreements. These modifications follow two kinds of editing rules. On the one hand, Lufthansa modifies time- and space- bounded features of international guidelines. On the other hand, Lufthansa adds additional rules when interpreting the international guidelines for its own, internal purposes.

The case study discusses the results in the perspective of the biopolitical management of animal life during the transportation and reflects on Lufthansa’s attempts to improve the well-being of animals.