Can immigration save the ageing economy of Finland? : the labor market integration of immigrants in the 21st century and the impacts of immigration on public economics 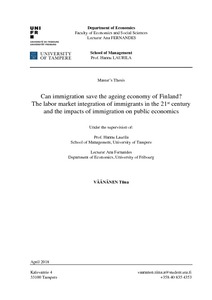 The population of Finland is ageing, and the demographic dependency ratio is weakening. In order to fix the sustainability gap of the public sector, several institutions have suggested increasing international net migration to be a solution to the ageing population and the potential lack of labor force. In this thesis, the aim was to observe whether immigration could possibly solve the financial problems faced by the public sector as the demographic structure becomes older. The question is approached with the help of two sub-questions. The first part observes the labor market integration of immigrants in the 21st century, and the second observes the net impacts of immigrant population on public economics in the light of previous economic research and literature.

If immigration is going to be a realistic solution to the sustainability gap of public economics, the immigrants should find employment and be able to contribute to the economy as tax payers. In this thesis, the labor market participation of immigrants in 2000-2015 was observed with the help of labor market integration indicators used by the OECD and the data provided by Statistics Finland, Eurostat and OECD. The results show, that the employment of immigrants has been considerably weaker in comparison to the natives in the 21st century. In an international comparison, the gap in unemployment between natives and immigrants is exceptionally large in Finland. However, when comparing the Finnish immigrant population to immigrants living in Sweden, the labor market integration of migrants has improved significantly in 2000-2015, and the immigrant populations living in Finland and in Sweden do as well on the labor markets, on average.

It is clear, that the population is ageing, and the share of tax payers is diminishing. Immigration could fix the age structure relatively fast, yet its net impact on public economics is challenging to estimate. International research has estimated the net impact of an immigrant to be similar to a native. On the other hand, the Finnish studies state that the net impacts on public sector vary strongly among immigrant population depending on their background characteristics. The net costs caused by the heterogenic immigrant population vary across immigrant groups. The migrants arriving from other EU and EFTA member states do not differ from natives, as those migrants who have arrived due to humanitarian reasons, can cause relatively large costs to the public sector. As the indicator of labor market integration revealed, there is a significant share of labor force potential among immigrants. Immigration could therefore fix some of the problems caused by the ageing population, but the challenge is to integrate them to the Finnish labor markets. At the moment, it seems like immigration cannot solve all the problems alone but can work well together with other policy measures focusing on affecting the problems caused by the ageing of population.