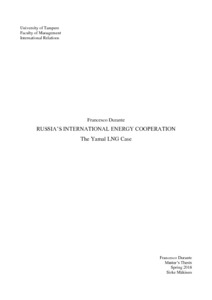 International cooperation is an important but often neglected topic. In 2017 the Russian Federation together with Asian and European partners completed the Yamal LNG project, one of the biggest in the world and the first within the Arctic Circle, only with a small delay in the schedule despite the Ukrainian crisis and the subsequent financial sanctions and ruble crisis.

The dissertation aims to understand how and why this project became reality and how international energy cooperation emerges by using the social–structurationist model of energy policy formation. Cooperation in IR is defined as ‘policy coordination’ but because energy policy constitutes its antecedent, the impact of domestic factors is also researched.

The topic is approached by a descriptive-explanatory case study with theory–driven qualitative content analysis as its method which permits to extract information from a text and to process it independently of the text. The data are diverse and include companies’ press releases, governmental and ministerial documents and transcripts of press interviews and meetings.

From the analysis it resulted that the socio-economic development of Russia was the primary interest of the government whose support allowed the project to run on time. Other actors held mainly a business frame whereas foreign partners were also fundamental in providing technology and financings. The importance of domestic factors also emerged as so did the way in which the structural dimensions enabled and constrained the outcome.

Few broader considerations can be drawn from this study: first, it appears that politically motivated financial sanctions might obstruct but not halt international energy projects. Second, with low oil prices Russia seems to be more cooperative. Third, it appears that the backing of a strong central government to a private energy project can positively affect cooperation. Fourth, with limited financing and technology a country could seek partnership only if its resource base is wide enough and it can preserve advantageous or best returns for itself.