Seen from the outside : perceptions of the EU in Kazakhstan 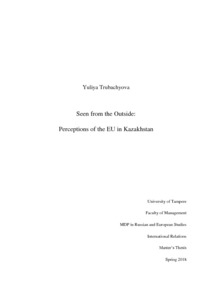 This study covers EU perceptions by different groups of Kazakhstani elites. The significance of the research is supported by the growing cooperation of Kazakhstan and the EU (for example, the Enhanced Partnership and Cooperation Agreement, 2015). Furthermore, the Kazakhstani perceptions of the EU are recognized understudied. Simultaneously, some controversy can be observed between the alleged and the real perception of the EU abroad.

Methodologically, in order to study elite perceptions, the thesis consists of two levels of analysis. First, the study relies on qualitative content analysis (QCA) of the mass media articles, namely, Kazakhstanskaya Pravda and Tengrinews portal, with 86 articles in total published during the 2015-2017 period. Second, with the help of QCA it reflects on the author-conducted interviews with media and business elites, civil society and experts/ academics in October-December 2017.

According to my analysis, the EU-Kazakhstan relations are perceived positively by both different parts of the Kazakhstani elite and different sources of data, namely, the mass media and the author-conducted interviews. The perception of the EU as a normative power is quite ambiguous while the image of the EU as an economic power is prominent. This topic should be included into the further studies to enhance mutual understanding and cooperation between Kazakhstan and the EU. The results may help IR scholars, policymakers as well as general public to broaden the horizon of the understanding of the EU international identity.