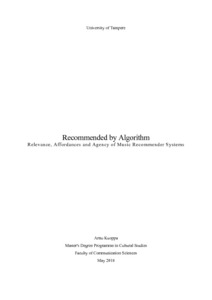 Software has indeed become an essential part of how cultural artifacts are circulated. Due to advancements in technology in the last decades, a significant amount of our everyday life activities is now mediated by these various applications. Software does not, however, only provide us tools we need; it also shapes our actions and transfers our boundaries of abilities to act. Therefore, it is not enough to analyze the relationship between user and technology only as a relationship between an actor and a tool. Instead, the relationship should be problematized and it should be acknowledged that it has become more complex and intertwined than ever before.

In my thesis, I focus on music recommender systems that are great examples of software technology since they increasingly influence on what information we receive and perceive most relevant. They also represent the development in which personalization and customization of services are becoming more common. In overall, these systems have been studied mostly from the technical perspective leaving a more cultural approach and user point of view often disregarded. In this thesis, I sought to to fill this gap in research by focusing on the user experiences instead of the systems. My main research question was: “how recommender systems shape and participate in the practices of music discovery and consumption of the users?”. This question was further divided into three themes: taste, relevance and agency.

In order to be able to answer my research questions, I interviewed eight people by using semi-structured focused interview as my data collection method and analyzed it by using theory-related content analysis. The interviews were conducted in Finnish as well as the analysis. The quotations presented in this thesis, however, are translated into English.