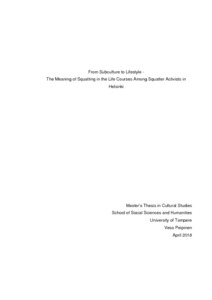 Squatting activism is seen in this study as a subcultural phenomenom. Squatting activism has been a significant part of youth culture in Helsinki since late 1970s but is still relatively unexplored and limited amount of research has examined the experiences of activists. Theoretically the study rests on the subcultural theory and especially following concepts of Andy Bennett, Jodie Taylor, Ross Haenfler, Patrick J. Williams and Paul Hodkinson. The concept of lifestyle is used in this study as a useful concept to explain subcultural participation.

The results illustrates that involvement in squatting activism was an influential part of activists adolescence. In the activist stories activism provided a channel for action and participation. Squatting activism of 1990s emerged as a response to young people´s housing need and housing crisis in Helsinki. Squatting activism offered opportunities for the production of subcultural spaces and do-it-yourself -practices. What started as young people´s radical activism early 1990s in Helsinki, became a space, where lifestyle and lifestyle choices were constructed. The results resonate with debates about youth cultures, that subcultural affiliation is most likely to begin during adolescence, but it´s significance can last a lifetime.