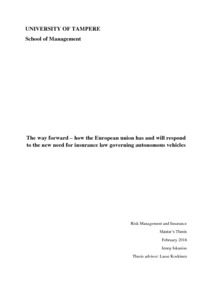 This thesis studies the current legislative framework for the insurance of automated and autonomous vehicles in the European Union, the changes made to current Member State regulation for the testing and deployment of such vehicles and attempts to predict future changes to EU level regulation. The aim of this thesis is to understand the non-technical aspects of autonomous and automated driving and its implications for insurance regulation and legislation within the European Union.
The introductory chapter presents an overview of international conversation on the subject of automated and autonomous driving, describes current EU development on the subject and presents the relevant international law. The chapter also describes the development of EU law, main EU legislative bodies and principles and the research setting. The second chapter studies the development of insurance law in the European Union and the development of Motor Insurance Directives from the year 1972. The development of Motor Insurance Directives is understood via amendments to previous legislation. European Commission’s public consultation on current directive (Motor Insurance Directive (MID) (2009/103/EC) is included in this chapter. The chapter three explains the theoretical framework of this thesis describing both the qualitative research method and the European Integration Theory. The fourth chapter studies four European Union Member States in detail on the countries’ policies on autonomous and automated vehicles. As a reference, changes made in four non-EU Member States, are also explained.
This thesis depicts, as the main results, a framework of the levels of regulation for insurance in the European Union, lists currently made changes to chosen countries and predicts possible changes. As such, this thesis discusses the possibility of the Motor Insurance Directive being amended or replaced. This thesis also discusses possible implications for insurance markets and companies and the possible opportunities and threats for timing of EU level regulative changes.