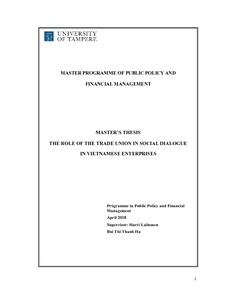 Businesses in Vietnam are witnessing a structural shift from being state-owned to equalized, private or foreign-invested ones, so the labour relationships are also changing. Consequently, increasingly popular labour disputes are negatively influencing the society and the economy, threatening business stability of enterprises, while social dialogues in the workplace are quite new. Therefore, this thesis studies the role of the trade union in social dialogues and maps the status of social dialogue in Vietnamese enterprises.

This study applies qualitative methods. The primary data were collected through interviews (n=21) and a survey (n=850). The secondary data consists of documents and statistics made available by the central actors in Vietnam such as Vietnam General Confederation of Labour (VGCL), Ministry of Labour-Invalids and Social Affairs (MOLISA). Findings of the research reassure the important role of social dialogue for Vietnam’s industrialization and integration into the international business world. Moreover, findings of the research indicate that arising issues and disputes in labour relations could be better tackled by social dialogue. The results highlight the central role of trade union in overcoming the weaknesses of social dialogues at the workplace. The research contributes to practice of social dialogue in Vietnamese enterprises and suggests solutions to enhance dialogues by clarifying the role of trade unions in workplace in order to develop harmonious, stable and progressive labor relations in Vietnam.