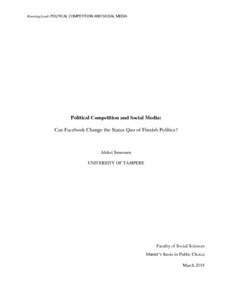 The rise of multiple social media platforms such as Facebook and Twitter have sparked a debate within political sciences on the degree to which these new platforms influence the overall political system. For some, the expected impact is assumed to diversify the number of people who wield and influence political power, while for others the impact concentrates and solidifies power to those who could be considered as political elites.

The purpose of this thesis is thus to investigate the underlying assumptions surrounding this debate and to construct a theoretical understanding of how social media can influence political power relations. The research conducted in this area has thus far mainly focused on studying Twitter and not many studies exist that have examined Facebook. Moreover, considerable gaps exist within the Finnish context, and no studies exist there that have explicitly examined what direct political gains social media platforms are able to give to its users.

This thesis aims to fill these gaps by adopting a case study strategy on the 2015 parliamentary elections held in Finland by using quantitative techniques to estimate the impact that Facebook has had on the electoral performance of those candidates who have chosen to use it in their campaign.

The results of this study show that Facebook is indeed linked with electoral gains, and especially the ability of candidates to acquire Facebook ‘likes’ is a significant factor that can boost their electoral performance. Furthermore, not all candidates are equal in this, and it is non-incumbent politicians who have gained the most from Facebook during these elections.

These results highlight the fact that social media in general and Facebook in particular are important subjects of political study and that they do capture a resource that the candidates can use to impact political outcomes. Moreover, this has implications for the future of the status quo of political competition within Finland and might change how politics and deliberation are conducted in the future.