Translating Kaurismäki : a stylistic analysis of the English translation of The Man without a Past 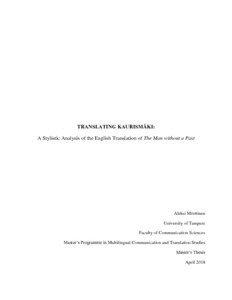 This thesis focuses on stylistic analysis of the English translation of the Aki Kaurismäki film The Man without a Past (2002) in order to determine to what extent the film’s highly idiosyncratic style of dialogue has been emulated in the English-language target text. This is done through a detailed analysis of the Finnish source text and a subsequent study of the target text. The aim of the thesis is to study the translation strategies employed in translating highly idiosyncratic and unconventional language.

My hypothesis is that while the English translation of The Man without a Past functions well as an audiovisual translation when studied from the perspective of more established and traditional translation theory, the so-called “Kaurismäki-esque” dialogue has not been emulated sufficiently in the target text.

I am using the Blu-ray release of the film from 2013 as my source material, as it has the exact same translation that can be found on the VOD-versions and the DVD-discs. The material for my analysis consists of extracts from the film involving the two main characters. This allows me to present the story of the film in chronological order, while analyzing and commenting on the material. After examining the extracts, I present my findings categorically and compile them into specific answers to my research questions.

The specific aspects of the translation under analysis are the emulation or imitation of Kaurismäki’s language through the use of formal language and vocabulary, multimodality’s effect on translation choices, and how well the translation retains the main roles of fictive dialogue: plot, character, and thematic development.

During my analysis, I found that although the translation functions well in recreating the plot, character, and thematic development in the film, the translation was rather inconsistent in the way that it emulated Kaurismäki’s style of dialogue. Sometimes it seemed that the target text functioned well stylistically by utilizing formal language and unconventional vocabulary, while other times the choices by the translator seemed much too informal and mundane to faithfully represent the highly idiosyncratic source material. Therefore, the answers to my research questions are inconclusive, as I could not identify any specific translation strategies utilized in the target text.