Lessons learned or mistakes repeated? IMF and the Greek crisis 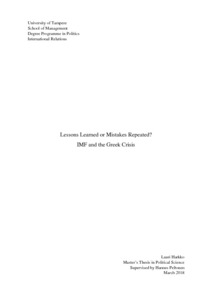 The International Monetary Fund undoubtedly has a key role in the maintenance of the international financial system, especially during times of crisis. However, the IMF’s actions have not escaped without criticism, especially during era of the Washington Consensus. After the difficulties caused by the conditionalities in the IMF programmes during the East Asian crisis of 1997-1998 the IMF started a process of reforms to ensure that its future programmes would prove more successful.

The purpose of this study is to find out whether the IMF learned its lessons the problems its programs faced during the Washington Consensus era and especially the East Asian crisis. This is done by first constructing a qualitative content analysis framework by examining both the criticism the IMF received and the reforms it initiated and by applying this framework to the minutes of the IMF executive board meeting that made the decisions to accept the Greek request for assistance during the Greece’s sovereign debt crisis. By analysing the statement made by the IMF executive directors and staff I a view will be constructed on whether the lessons of the past were included in the IMF’s 2010 decision making.

The findings of this study are that the IMF, as per the statements made during the executive board meeting, has only taken a limited amount of lessons to heart. In issues related to the ownership of the programme or protection of vulnerable groups the IMF seems to have made improvements. On the other hand, in the perhaps most criticized aspect of IMF’s past programmes, that of promoting austerity policies, the IMF consensus opinions does not seem to have changed, which indeed proved detrimental to the success of the F.irst Greek Economic Adjustment Programme.