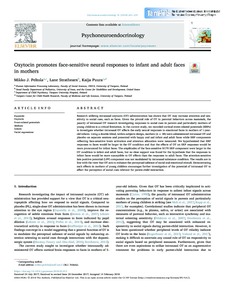 Research utilizing intranasal oxytocin (OT) administration has shown that OT may increase attention and sensitivity to social cues, such as faces. Given the pivotal role of OT in parental behaviors across mammals, the paucity of intranasal OT research investigating responses to social cues in parents and particularly mothers of young children is a critical limitation. In the current study, we recorded cortical event-related potentials (ERPs) to investigate whether intranasal OT affects the early neural responses to emotional faces in mothers of 1-year-old infants. Using a double-blind, within-subjects design, mothers (n = 38) were administered intranasal OT and placebo on separate sessions and presented with happy and sad infant and adult faces while ERP components reflecting face-sensitive brain activation and attention allocation were measured. We hypothesized that ERP responses to faces would be larger in the OT condition and that the effects of OT on ERP responses would be more pronounced for infant faces. The amplitudes of the face-sensitive N170 ERP component were larger in the OT condition to infant and adult faces, but no clear support was found for the hypothesis that the responses to infant faces would be more susceptible to OT effects than the responses to adult faces. The attention-sensitive late positive potential (LPP) component was not modulated by intranasal substance condition. The results are in line with the view that OT acts to enhance the perceptual salience of social and emotional stimuli. Demonstrating such effects in mothers of young children encourages further investigation of the potential of intranasal OT to affect the perception of social cues relevant for parent-child interaction.