Evaluation of the impact of a school based health education program on caregivers’ knowledge, attitude and practices of malaria, diarrhea and pneumonia in Ibadan north local government area of Oyo state, Nigeria 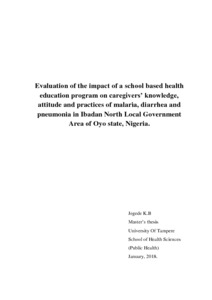 Malaria, diarrhea and pneumonia (MDP) are the highest disease specific contributors to childhood mortality in sub Saharan Africa and southern Asia with 82% of deaths emanating from Sub-Saharan Africa and southern Asia. Preventable infectious diseases are responsible for 58% of all deaths among children aged 5 to 14 years; 8% from Malaria, 18% from diarrhoea and 10% from pneumonia. There is need to develop new models of preventive health information dissemination so as to reach out to hitherto unreached people in affected low and middle income countries (LMIC).
Government sponsored public primary schools attended by majority of the population in Nigeria provide a good platform for interacting with caregivers considered hitherto unreached by preventive health campaigns due to their socio-economic status. The frequent mandatory parents and teachers association meetings (PTA) provide a vantage for participatory preventive health information dissemination ceteris paribus.

This study aimed to evaluate the impact of a school based health education program on caregivers’ preventive health knowledge, attitude and practices regarding malaria, diarrhea and pneumonia in Ibadan metropolis, Oyo state, Nigeria. The impact of awareness creation about risks of school sustained injury among primary school pupils on incidence of injury in selected schools was also evaluated.
This study was based on a developmental program tagged Improving Child Health in Public Schools (IPCIP) which was carried out in Ibadan North area of Oyo state, Nigeria. The methodology adopted was a before and after approach. Data collected from caregivers of pupils with a validated knowledge, attitude and practices (KAP) questionnaire at baseline were compared with those collected using the same questionnaire after preventive health education interventions on malaria, diarrhea, pneumonia and school sustained injury(for pupils) in nine study schools. They were compared to a control group of three schools with no such interventions.
Changes in caregivers’ knowledge of causes and symptoms of MDP, medication compliance attitude and care seeking practices (Primary healthcare utilization) were measured and scored before and after two years of interventions at PTA meetings. Trend of school sustained injuries was also monitored in both groups with pupils in the intervention group receiving injury prevention counseling. Responses from study groups were compared using pearson chi square test and socio-demographic differences among study groups factored in using binary logistic regression analysis. Test of proportions was used to compare school sustained injuries in both groups.

The result of the study reveals that caregivers’ attitude on medication compliance and healthcare seeking practices can be improved significantly by the introduction of preventive health education to Parents and Teachers Association (PTA) meetings. However, changes in the knowledge of causes and symptoms of MDP varied and were not significant except in malaria. The result also indicates that pneumonia should be emphasized as a public health emergency due to relatively low awareness and paucity of studies on it relatively to malaria and diarrhea. Counseling of pupils on injury risks drastically reduced the incidence of injury in the intervention group. Training of teachers on preventive health, injury risk reduction, first aid administration and availability of first aid kits in schools in Nigeria are recommended considering the alarming proportion of pupils that sustained injuries in the study schools.