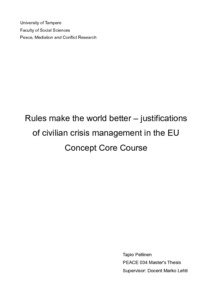 Civilian crisis management is a part of the European Union's foreign policy, but it and its impacts has been studied empirically relatively little. This study explores how doing civilian crisis management is justified to personnel being trained to work on those missions. The aim of this study is to chart out what civilian crisis management purports to pursue, so creating testable hypotheses for future research becomes easier.
This study was conducted by participatory observation of an ENTRi-certificated EU Concept Core Course held by Crisis Management Center Finland in April 2017. The Core Course is the most basic training given to almost all personnel willing to work in civilian crisis management missions. It outlines the foundations, basic vocabulary, central concepts and aspects of practical work that are deemed most important for working on a mission. These observations were then analysed against a framework of liberal peacebuilding and its critique using a grounded theory methodology.
The main findings were that civilian crisis management is justified in five major ways: creating security for the EU, creating a rules-based liberal order, spreading liberal values that are deemed universal, acting as tools in foreign policy, and making societal changes efficient and sustainable. The EU's civilian crisis management subscribes to a liberal-realist hybridisation of an orthodox view on international peacebuilding, where force-controlling states shape the creation of liberal institutions and pursue their own gains while trying to balance values, rights and fairness.