Baltic dimension in the contemporary foreign policy of the USA : analysis of the relations of the USA and the Baltic States concerning security and defence issues 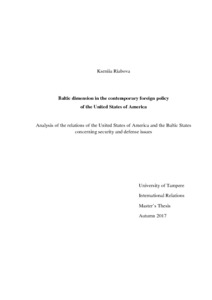 The United States of America has significant international standing. That is why a researcher cannot but take into account the political preferences of the USA investigating problematic issues of the world politics. The main purpose of this thesis is to analyze the US foreign policy in the Baltic region through the analysis of the American administrations views on the Baltic States.
The current situation in the political arena and strained relations caused by the Ukrainian crisis make my work relevant and enhance its significance. The Baltic region is strategically very important for the region, so regional countries support is very important to the USA. It helps it to gain a foothold in the strategically important points of the continent and to strengthen control.
The subject of the thesis is the foreign policy of the United States of America in the Baltic region. The following issues are considered in the thesis: the relations between the USA and the Baltic States from a historical perspective; President Obama’s foreign policy towards the Baltic States; factors that the USA used while forming the foreign and domestic policy of the Baltic region; the prospects of the relations between the USA and the Baltic States; and the role and importance of the Baltic region in the USA foreign policy.
Referring to the neoliberal theory and the concept of soft power the research highlights the fact that the military expansion of the USA still exists but at the same time it is taking on a new meaning and being applied through new instruments. As a result, NATO presence in the Baltic region is not considered by states of the region as occupation or a threat to the sovereignty or intervention in the internal affairs. For the Baltic States, the USA and NATO actions are positive and they look like the guarantors of stability in the region deterring the aggressor. Besides, I argue that the concept of soft power, which became very popular during President Obama’s Administration, provides a very accurate description of the USA modern policy on the world arena, when troops do not mean war and destruction, but maintaining peace and prosperity of the nation.
The thesis shows how the American politicians use mechanisms of soft power involving different international actors in the decision-making process as well as using economic and cultural levers of influence. As a consequence, there is a process of evolution of American militarism in case of implementation of the Baltic States mechanisms of soft power.