Managing the popularity of streams in the Twitch.tv gatekeeping network 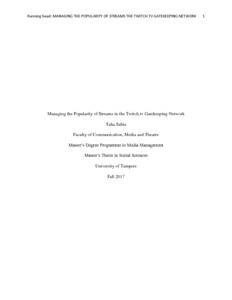 In a digital age where user generated content is spreading rapidly on the internet and its use and consumption are becoming more and more popular, information control becomes harder to exercise by institutions on social networks where the information circulation is growing rapidly. The influence of power evolves from a unidirectional exercise of power, to a negotiated power in a multidirectional gatekeeping network. Gatekeepers in these networks hold different power positions based on how they each affect the flow of information inside a network. On Twitch.tv, the information is the streams broadcasted on the social platform, and their circulation is reflected by the popularity of these streams and how large of an audience they draw. This study explores how the gatekeepers influence the popularity of the live streams in Twitch. The gatekeepers present in the Twitch gatekeeping network each affect the popularity of the streams differently resulting in a changing power positions in the network.

In the gatekeeping network theory model established by Karine Barzilai-Nahon, thirteen gatekeeping bases were identified: Selection, Addition, Withholding, Display, Channeling, Shaping, Manipulation, Repetition, Timing, Localization, Integration, Disregard, and Deletion. These bases are the processes by which the gatekeepers affect the circulation of information in a network. This study identifies the gatekeepers who constitute the Twitch network (namely game publishers, Twitch, streamers, and the audience), then seeks to identify the gatekeeping bases used by each gatekeeper to affect the popularity of the streams on Twitch. This process will help establish the relative power of each gatekeeper in comparison to the others. To answer these questions, mixed methods were used combining a netnography and a questionnaire. To identify which bases are used by the game publishers, Twitch, and the streamers, netnography in the form of participant observation was used. A selection of screenshots and a collection of web articles were collected and analyzed to identify the bases used by these respective gatekeepers. This analysis was conducted using manual qualitative coding based on a large selection of screenshots captured during the netnography. An immersion of the researcher in the platform seeks to establish the processes used by these gatekeepers and how they reflect on the popularity of the streams. To identify which bases are used by the audience, a questionnaire was used to generate insights about how the audience chooses streams to watch and how it contributes to spreading them online and thus helping to popularize them.

Finally, a discussion of the results shows how the gatekeeping network of Twitch is a dynamic one where the popularity of the streams is negotiated between the different gatekeepers not only confirming the change in theory from a unilateral model to a multidirectional model, but also hinting to an increasing influence of the active audience over this popularity. The popularity of the streams is then the result of a participatory effort by all the stakeholders that results in the popularity of the streams and the Twitch platform in which the audience plays a central role. The implications provide a couple of first few hints to how Twitch can make more engaging tools to encourage audience participation in the live streams, while providing better visual content to the viewers.