Breast-feeding patterns in rural China : a population based study 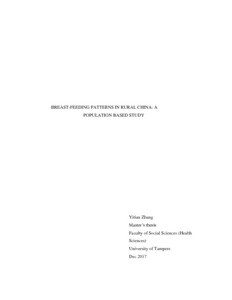 Background: Breast-feeding is considered to contribute infant’s health and development, protecting children from a variety of acute and chronic disorders as well as potential benefits for mothers. Breastfeeding has also potential to protect against childhood obesity; however, the evidence on the risk factors of breastfeeding remains unclear especially in the context of rural settings.

Objective: The objective of this study is to analyze the patterns and determinants of breastfeeding in three rural provinces of China.

Methods: A survey of new mothers in five rural counties among three province-level administrative divisions (Anhui, Shanxi, and Chongqing) in China was conducted in 2009. Data were collected by an interview after the interventions, including the demographic and pregnancy related characteristics of the mothers. Exclusive breastfeeding was measured by asking mothers the duration of the breastfeed only (in months) and categorized into two (0 to5 months and 6 to 11 months). Logistic regression was used to model the relationship of measured characteristics to the duration of exclusive breastfeeding. Odds ratios (ORs) and their 95% confidence intervals (CIs) were reported as the measure of the associations.