More security – the new normal for the EU? – neofunctional analysis of the EU’s firearms directive 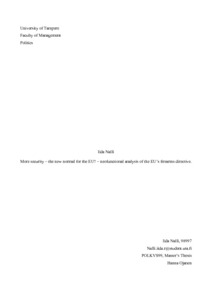 Arne Niemann’s revised frame for neofunctionalism is used to analyse the pressures shaping the directive. The focus is especially on the urgent threat of terrorism and media coverage on the ‘gun problem’ in Europe as ‘exogenous pressures’ shaping the outcome of the directive; the Commission’s leadership role as security promoter trying to create a ‘genuine security union’ and to reinforce EU’s role as a security provider for EU citizens; and Finnish resistance as an example of ‘countervailing force’ resisting Commission’s leadership and integration in the field of security.

The firearms directive is a case exemplifying EU security integration and it shows how terrorism has become a key factor defining security cooperation at EU level. It is also a case example, which shows how national dynamics are resisting security integration, and on the other hand, how supranational forces are pushing it forward. Analysis of the firearms directive suggests that the supranational institutions of the EU, especially the European Commission, seem to gain power in times of uncertainty. Moreover, it proves that the traditional intergovernmental frame and cost-benefit thinking of the member states fails to explain recent integration, at least in the area of internal security. Overall, my conclusions support recent theoretical trend suggesting that EU cooperation has intensified in the sensitive fields of CSDP/CFSP and AFSJ and that intergovernmental bargaining settling for ‘minimum denominator’ in the areas of high politics can possibly create serious challenges for the EU in the future.