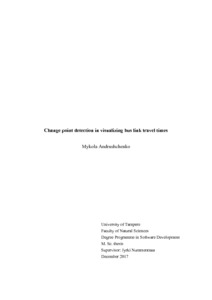 The volume and availability of traffic data has grown tremendously in recent years, and applications based on their analysis continue to offer more and more services to the general public. This work presents a practical implementation of the concept of bus links, i.e. bus stop pairs, an approach that has mostly been discussed theoretically up to now. The requirements and scope of the development have been influenced by findings attained in prior work.

The implementation represents an online tool used to visualize the current traffic situation in the city of Tampere by colouring bus links in accordance with their estimated congestion. Data packets utilized in the visualization can be also dispatched to other clients for further analysis. Consequently, the tool is able to provide information relevant to commuters and data analysts while avoiding the computational load typically associated with processing large volumes of input data.

The problem of change point detection arose in the analysis of link data. The traffic model recording the relative fluency of each link was required to store indicator values for distinct periods of traffic flow, and thus identify their endpoints from the respective link’s travel times. The implementation was adjusted to perform a number of tests in order to select the most suitable algorithms for this task, with a practical emphasis on their performance in the given application. Change point distributions produced by various methods were considered in terms of their feasibility, both in the visualization and in possible data analysis.