Whose interests does the burqa ban serve? : An analysis of the effects of the ban on full-face veils on radicalisation and terrorism in France 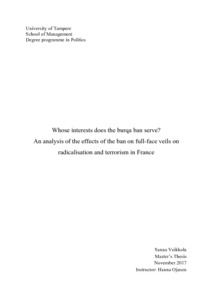 The logic of provocation relies on the assumption that terrorist groups use terrorist tactics to overcome the collective action problem by goading the perceived enemy government into an indiscriminate counterterrorism response that would then lead to radicalisation of the moderates and mobilise more people to violence. The instrumental value of indiscriminate counterterrorism response, meaning that the measures would target the whole population the terrorists are part of, as a radicalising factor is the main theoretical focus area of this research and will be employed as the theoretical argument applied to the analysis of the effects of the legislation restricting the use of the full-face veils. Burqa bans, then, are understood here as indiscriminate government response targeting the whole European Muslim population.

Previous research shows that indiscriminate or particularly harsh counterterrorism measures as a response to terrorist incident cause a backlash effect which leads to increase in terrorist activity. Researchers and security experts have also indicated that the burqa ban could lead to a similar counterproductive effect in alienating an already marginalized group of people even further and might serve as a radicalising factor in the long run. This thesis will build on these findings.

The analysis, conducted as a case study on France, provided some initial support for the argument. Based on the analysis of the French burqa ban, its effects on Muslim women, terrorist propaganda material and terrorism and foreign fighter statistics, it can be concluded that the analysis supports the argument about the ban providing tools for terrorist recruitment. In addition, accounts provided by the Muslim women provide initial support for the grievances based argument. Analysis of the terrorism and foreign fighter provide some initial support for the argument, however, the data is insufficient for drawing robust and comprehensive conclusions. The methodology and data employed are unable to provide robust support for the hypothesis claiming that implementing a burqa ban leads to increase in radicalisation and terrorist activity. For comprehensive and sufficient analysis on the effects of the burqa ban on radicalisation and terrorist activity further research is needed.