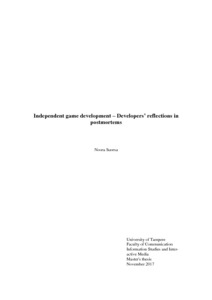 Independent computer games have gained a lot of popularity in the past few years. Digital distribution methods and networks have made it possible for indie games to find more players, and get an easier access to markets, and get noticed by the consumers, than it was during the traditional brick and mortar shop based retail and console game dominant era. The increased popularity and number of indie games and developers has made indie games an interesting research area. Research of independent games has focused on very specific research topics; this study aims to gain a broader view of independent game development with the developers’ perspectives.

The objective of this thesis is twofold. First we take a closer look at the indie games through academic literature: how independent games are being defined and described in academic game studies, we also describe and map out some of the other phenomena such as digital distribution and crowdfunding that have significantly aided in their entry to the game markets. Then we analyse indie game development postmortems using con-tent analysis. What are the most common problems and success factors of indie game development in these postmortems? Are these success and failure factors similar to the defining features and aspects of indie game development outlined by academic literature?