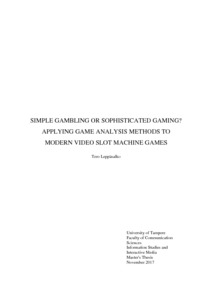 Slot machine games have become the most popular form of gambling worldwide. In Finland, their pervasiveness in public spaces and popularity makes them one of the most common form of gaming.

Research regarding slot machine games as games is scarce despite their many intriguing elements that cross disciplinary borders. Modern video slot machine games have evolved into a form of complex digital entertainment, which calls for open-minded collaboration of game studies and gambling studies in particular, but many other disciplines as well.