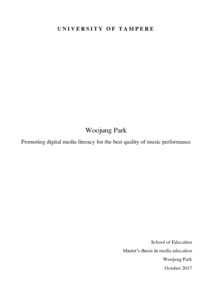 Upon the 21st century, media educators have focused on audio-visual media such as newspaper, television or film, and neglected the educational need for music as a medium. Music is the important channel of students to form their unique identity and define their inner being, history, and emotions, as other audio-visual media provide the platform for that. The negligence toward music in media education has been compensated by research conducted for the media use in music education. However, most of the studies were about gaining musical knowledge more effectively, music composition through digital media and creating the online community of practice for students to form their musical identity. As media education emphasizes, expressing one’s emotions, identity and their message in an effective way is highly important, and in terms of the medium of music, people express and empower themselves through music performance.

This action research aimed to discover the effective digital media use to promote the best quality of music performance by conducting and analyzing from the perspective of flow theory and music performance anxiety. This project-based action research was conducted by two participants as co-researchers and main researcher preparing and performing a concert to gather qualitative data, such as personal in-depth interview, research diary, audio records and video records. Then, the framework analysis method was used to describe, analyze and synthesize the result. The findings derived from the framework analysis describes that the personal and collective use of digital recording device and digital media contents such as YouTube videos were highly effective to promote flow experience and reduce the debilitative music performance anxiety level. However, poor quality of the microphone and speaker system on the stage caused the debilitative music performance anxiety for all band members consisting of two co-researchers and the main researcher.

By reflecting this research, following groups can be beneficiaries to increase their expertise and reveal the musical identity more effectively: media educators, music educators, amateur musicians and students taking music classes in public school or privately.