Undergraduate students’ use of Facebook for educational purposes : advantages, difficulties, and potential for connected learning 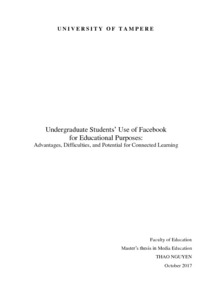 Facebook is currently the most popular social networking site globally and inevitably getting integrated into different facets of life. The prevalence of Facebook and its profuse affordances (both technical and social) have raised controversial opinions among scholars on applying Facebook to education. In Vietnam, while the number of Facebook users is ranking as the 7th largest worldwide, research on this platform remains remarkably insufficient and mostly limited within social or psychological perspectives. Also, while the country is struggling to improve its long-criticized education system and catch up with global trends of integrating new technologies into learningteaching contexts, there is a void of understanding on social networking sites, especially Facebook, in relation to education.

The research aims at examining how Facebook is utilized for educational purposes by undergraduate students from Ho Chi Minh University of Education (Vietnam) and their perceptions of applying Facebook to the teaching-learning process, upon which the advantages and disadvantages of Facebook as an educational tool in higher education are clarified. Additionally, through students’ actual usage and perceptions, the potential of Facebook for connected learning is discerned in search for feasible solutions to the Vietnamese educational reform. The Theory of Facebook for Educational Usage and Theory of Connected Learning set the theoretical framework for this study.

In the research, the mixed methodology of qualitative and quantitative approach was applied to attain optimal understanding. Data were collected from an online semi-structured survey of 394 voluntary undergraduates and five following-up theme-based interviews.

Findings from the research confirmed the three primary usages of Facebook for educational purposes (Mazman & Usluel, 2010) including communication, collaboration, and sharing resources or materials. Besides those assisting functions of Facebook for education, particular problems were detected, namely distraction, ineffective collaboration and communication, information accuracy, and cyber-bullying. Although most students were using Facebook in diverse ways to benefit their studies, a proportion of them held relatively skeptical views on the empowering role of Facebook for education, indicating a gap between students’ actual usage and perception. It was also found that Facebook had the potential for promoting connected learning, however, the site still had certain drawbacks that were worth consideration. Based on aforementioned findings, some implications are drawn out for higher education and research.