Representations of Japan by the video game industry : the case of Ôkami from a Japanophile perspective 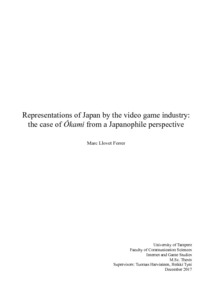 Video games contain representations, and these can have effects on players, for example on the ways they understand certain concepts or see certain places. The purpose of this thesis is to delve into how Japan is represented in video games. With that target in mind, the video game Ôkami (Clover Studio, 2008) for Nintendo's Wii console has been analyzed as a case study, and the potential effects of its representations have been reflected on. In order to carry out this work, the context of the Japanese popular culture industry has been considered, while the particular perspective of a Japanophile has been adopted. The first concept refers to the combination of enterprises responsible of popularizing Japanese culture internationally through products (with manga, anime and video games as leaders) since the last years of the 20th century. Regarding Japanophiles, they are understood in this thesis as the most avid (non-Japanese) consumers of those products who, carried by a 'Japanophile' euphoria, have formed a social movement and an identity that are bound to Japanese culture.

The methods employed have mainly been an extensive literature review and a game analysis. The purpose of the literature review has been to provide theoretical background to the thesis, discussing three main subjects: Japanophilia and the Japanese popular culture industry, representations from a game perspective, and representations from a player perspective. This theoretical background has been built drawing mostly from the field of game studies, but also from the fields of cultural studies and cultural geography, constituting the research as an interdisciplinary one. Furthermore, the literature review has also helped to understand better the method of game analysis.

The thesis has produced four main results: firstly, the certainty that Ôkami constitutes a door from Japanese popular culture into Japanese traditional culture, allowing Japanophiles to access aspects of the country that do not usually prevail in the products they consume. This traditional world, however, appears commodified and re-conceptualized, displaying popular elements such as cliches. Secondly, the polysemic character of video games is reaffirmed, as well as the fact that they are better understood as generative substrates. This conclusion has been reached upon finding that many of Ôkami's representations are very interpretable, and that some can even contradict each other. The main, most feasible representations of this kind portray Japan as a place of sexism, neoliberalism and ethnical supremacism. The third conclusion is that Ôkami contains elements that provide its depiction of the country with geographic authenticity, a feature that is interesting in light of how it can help players to understand better the Japanese reality. According to the fourth and last conclusion, Ôkami's game world is understood as a world of Japanophile affect. In that case, Japan is depicted as a dreamworld that is possible, and Japanophile players are encouraged to bring their philia further and maximize their lifestyle.