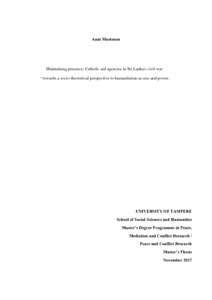 In my research, I focused on the Catholic aid agencies who were authorised to remain or to pay short visits to the restricted area. I sook to describe the political and institutional aspects which contributed to the presence of these actors.

I collected data by interviews conducted in Sri Lanka and via Skype, by qualitative surveys (questionnaires) as well as humanitarian reports by aid and development and online news articles. The method for analysis was two-part. The first part consisted of discourse and content analysis of the news sources, reports and interviews. Another part composed of a theoretical framework that guided the analysis of semiotics and political discourses to particular themes. Here, I adopted Alex Golub’s (2014) theory of feasibility, which aims to describe how collective actors become powerful social and political actors, “leviathans”. I asked through which discourses or processes (historical, semiotic, political, institutional) the Catholic Church and its aid bodies have become (and may have failed to become) legitimate and neutral humanitarian actors.

My research indicated that the feasibility of Catholic aid agencies is supported by the institutional structure of the Catholic Church. On the one hand, the system facilitates localisations, and on the other, the Church can engage in the high-level negotiations and advocacy. Regarding politics, the Church and its aid agencies have managed the relationship with different political factions in a way that has facilitated humanitarian work on the ground. Lastly, through the theorisation of leviathan as an analytical tool which helped to analyse a range of elements that characterise the Church, I argued that that the Church’s power derives from an ability to subsume various elements “into one” (Golub 2014, 13) for the feasibility of its humanitarian missions.

In terms of the research on humanitarianism, my analysis demonstrates the benefits of problematising conventional notions of humanitarian presence and actors (such as the UN agencies and ICRC). As a discussant pointed out earlier, there are under-researched or under-reported organisations or even individuals who gain access and have the presence during the conflict. Thus, by broadening the perspective to other actors and then identifying the extended networks that go beyond humanitarian programming enables to see the presence and influence of the side-lined actors, as paraphrased by Johnson (2016).