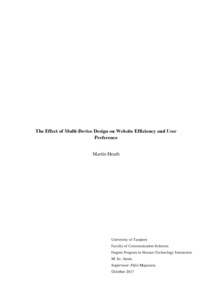 Modern websites must accommodate many different devices with varying screen size without decreasing user experience or losing relevant features or content. In this thesis, three different multi-device design approaches, adaptive, responsive and mobile-dedicated, were researched on desktop, tablet and smartphone devices to ascertain whether one approach is superior to the others in terms of user preference and website simplicity and efficiency. A total of eight mock websites were created to represent the approaches on each device.

The mock websites were first evaluated with an expert analysis, wherein the indi-vidual page load times and aesthetic values of the sites were calculated. Then, a user study was performed, where 10 participants performed search tasks on each mock website, evaluating each site after completing the tasks. Additionally, a semi-structured interview was conducted after each study session and eye tracking data was collected during the study to identify possible differences in gaze behavior between the mock sites.

The results showed that no single approach was superior, as the results were very similar. However, it was discovered that participants disliked the mobile layout on the desktop device, even though it produced the highest efficiency. The results additionally suggested that mobile devices are preferred for their ease of use and accessibility, in-stead of for the layout design. Finally, a behavior where participants let their eyes rest while using the device to browse through a site was observed. Further study is suggested for the behavior, dubbed restful browsing, as it could have a strong influence on mobile web use.