Member states rejecting ‘Frankenstein Food’ : a principal-agent analysis of the policy process that led to the possibility to ban the cultivation of GMOs 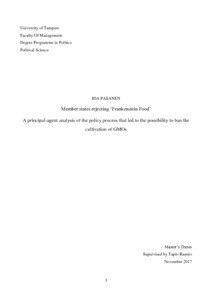 In this thesis, I study a policy process that led into a possibility to ban the cultivation of GMOs in the member states of the European Union. In practice, this happened by adding a new article to the directive 2001/18/EC. Before the policy process, all the member states were required to allow the cultivation of GMOs that were authorized at the EU level. However, this prior “one-size-fits-all approach” did not work as planned. A number of member states invoked safeguard clauses to prevent the cultivation of the authorized GMO crops, while the pro-GMO countries could not cultivate as great of a variety of different GMO crops because other countries were blocking the authorization of them. In addition, because of a continuous blocking of new approvals on GMOs, the EU had in place an unofficial de facto moratorium of new GMO approvals which was problematic from the point of view of the rules of the international trade. In this thesis, I study the legislative process that led into amending the directive 2001/18/EC and to some extent, renationalizing the decision-making on GMO cultivation. The focus is on the roles of the main EU decision-making bodies in the process, namely the European Commission, the Council of the European Union and the European Parliament.

The interest lied in the interplay between the institutions, the expected preferences of them and dynamics within the Council. The analysis is done by using three different approaches. The model used in this thesis regarding the expected preferences of the institutions is based on Mark. A. Pollack’s (2003) perception of the principal-agent analysis in rational choice institutionalism. In addition to this, the Parliament’s environmental ambition is analyzed by using typology developed by Burns and Carter (2010). The strategy used by the “leader” countries within the Council are analyzed by using the classification by Liefferink and Andersen (1998). Key material for this research consists of the official drafting documents of the directive, as well as journalistic reports. The method of the thesis is an intrinsic case study. The case that is studied is the policy process 2010-2015 that led to member states’ right to ban the cultivation of GMO crops in their territory. The decision was made under the rules of the co-decision procedure.

The analysis revealed a political environment unfavorable to the continuance of the centralized approach. The Commission and the Parliament both acted in a counterintuitive manner throughout the policy process as they are generally believed to be both pro-integration and for maximizing competences, both for themselves and for the Union as a whole. A slightly deeper look into the history of the food-related risk regulation, the prevalent political environment of the time and the policy documents provide a few possible reasons for their actions such as increased Euroscepticism, that has also in the past affected in a similar manner the Commission. In addition, the analysis revealed that the Parliament demonstrated pro-environmental preferences, as it made pro-environmental amendments to the initial proposal for the directive despite many of them being blocked by the two other institutions. Still, the Parliament was able to ‘green’ the proposal, even though the final text was closer to the common position of the Council. Within the Council, a pushing effect of certain “green member states”, especially Austria’s, was prominent.