Prevalence and risk factors associated with under-5 mortality : a multi-country comparative study in South Asia 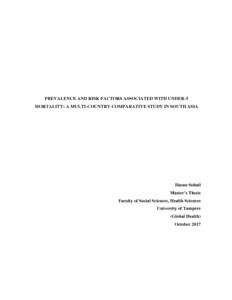 Background: Remarkable achievements have been made in the last decade to reduce the child mortality worldwide. However, South Asia has one of the highest numbers of child deaths. Out of 10 child deaths worldwide, three occur in South Asia. The under-5 mortality rate is still very high with 51 deaths per 1000 live births. Moreover, the overall and country-specific risk factors associated with under-5 mortality in the region are largely unknown. This thesis aimed to study the difference in under-5 mortality in WHO South Asian countries and then to explore whether the associated risk factors are the same or different across the countries of South Asia.

Methods: This study was based on Demographic and Health Survey (DHS), data collected from five South Asian countries (Bangladesh, India, Maladies, Nepal, and Pakistan). Data were obtained from the most recent live under-5 births from mothers within five years prior to the survey (n=570676). Under-5 mortality, death of the children from day of birth to fifth birthday of child was the outcome variable in this study. Association of under-5 mortality with risk factors including socio-demographic variables was studied using Cox Proportional hazard method. The estimates were presented as hazard ratio (HR) and their 95% confidence interval (CI). Survival Curves were used to explain the difference in survival of under-5 children in each country.

Conclusion: The prevalence of under-5 mortality is still high in South Asia. Most of the socio-demographic factors are associated with under-5 mortality and are common risk factors for under-5 mortality across WHO South Asian countries. For improving the under-5 survival and achieving the Sustainable Development 2030 target, countries in South Asian region needs to put efforts on maternal and child health. Country-specific strategy should be focused on most prevalent risk factors. A multi-faceted approach that includes health and other related measures is needed to improve the child survival.