The effects of fiscal policy on long-term interest rates : evidence from 29 OECD countries 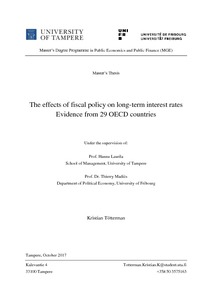 How does fiscal policy affect long-term interest rates? Despite the broad literature in this field of research, the results on both the magnitude of the effect and under which conditions it prevails still remain vague today. This thesis seeks to clarify these issues. It begins by discussing the link between fiscal policy and interest rates from a theoretical point of view and by reviewing the empirical literature on the topic. The empirical part of the thesis then applies fixed effects estimation on a panel of 29 OECD economies over the last three decades. A so-called baseline regression with common specifications is estimated first, as it provides the base case for our empirical analysis. The model is then expanded in several ways to tackle factors that are omitted in the baseline regression but have strong theoretical reasoning to be included in the model.

We find the baseline regression to describe poorly the variation of long-term interest rates with the post-financial crisis data, but to provide plausible results when it is estimated solely for the pre-crisis data. Our results imply that this is due to certain complexities caused by the crisis that cannot be tackled with the baseline regression alone. By extending the model, the presence of unconventional monetary policy tools, credit ratings and capital account openness are all found to have an important effect on the relationship between fiscal policy and long-term interest rates. Furthermore, our results imply that the addition of the prior two measures successfully tackles most of the complexities caused by the crisis. Hence, we propose them to be an important part of a robust setup for studying the interest rate effect of fiscal policy with post-financial crisis data.