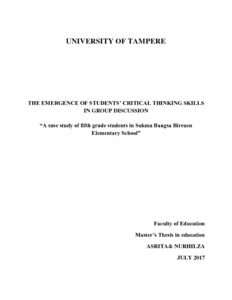 The ability to think critically requires the skills to analyze, evaluate and synthesize problems. It is considered as one of the skills that should be trained in primary school so that its benefit will be felt by students when they arrive in higher education. For fifth grade students, it is important to understand the variety of critical thinking skills which appear and disappear in the learning process. Group discussion is one of the teaching methods used in this research to identify the emergence of students' critical thinking skills. The participants were 50 students from two classes of fifth graders who were then divided into small groups consisting of three or four students. Six small groups in fifth grade A discussed "Indonesia's Strategies in Overthrowing the Colonizers" and six small groups in fifth grade B discussed "Creating the TV Advertisement". The process of group discussion was facilitated by classroom teachers while the researchers observed and recorded it. Observation of students' activities during group discussion was conducted to classify fourteen critical thinking concepts (practice, action, management, appreciation, awareness, care, evaluation, understanding, analysis, appraisal, interpretation, being, reflection, reviewing) which emerged in the learning process using group discussion. From the data transcribed, the results showed that eleven critical thinking concepts (practice, action, management, appreciation, awareness, care, evaluation, understanding, analysis, appraisal, interpretation) could be found in fifth grade students, while three of them are missing (being, reflection, reviewing). It could be concluded that the students' ability to think critically was developed after getting experiences in learning by using group discussion. However, an important factor in fostering students' critical thinking skills was teachers' involvement. Thus, teachers need to fully participate to stimulate students to express their critical thinking skills in the learning process.