The association between BMI, Waist-to-height ratio and blood pressure in Russian, Somali and Kurdish migrants residing in Finland 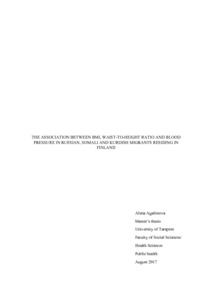 Background: Obesity is a known risk factor for hypertension, leading to premature cardio-vascular morbidity and mortality. In Finland, overweight and obesity have increased over the past decades. Additionally, during the last two decades the proportion of migrant population in Finland increased more than five folds. Hence, migrants' health has become a matter of scientific interest. There is limited research on obesity among migrants and its association with blood pressure and hypertension. Existing evidence suggests that weight and blood pressure association varies by ethnicity.

Subjects and Methods: The cross-sectional study about migrant health and wellbeing was conducted in Finland during 2010-2012. A random sample of 3000 migrants of Russian, Somali and Kurdish origin, aged 18-64 years, residing in Helsinki, Espoo, Vantaa, Tampere, Turku and Vaasa was selected for the study. Data were collected by means of a face-to-face interview/brief questionnaire and health examination. In this study a sub-sample of migrants, aged 30-64 years, who participated in health examination (n=899) was used. Comparison data on the general Finnish population were obtained from the Health 2011 Study (n=885). The linear regression was used to assess the association between anthropometric indices and blood pressure, and logistic regression was used for the association between categorical variables and hypertension.

Conclusions: There were significant variations in the association between obesity indices and blood pressure in migrants compared with the general population. Blood pressure regulating mechanisms seem to differ in Somali and Kurdish migrants in comparison to the native population. Further research is required to clarify the BP-regulating mechanisms in East African (Somali) and Middle Eastern (Kurdish) migrant populations.