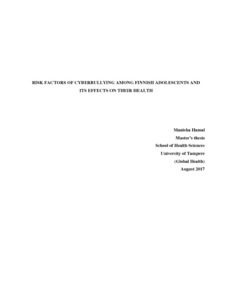 Methods: Cross-sectional, self-administered questionnaire survey on nationally representative sample of (12, 14, 16 and 18) years old Finns was conducted in 2015. Altogether 6698 respondents (boys 2870 and girls 3828), response rate 41%, replied the survey questions. Self-reported health, subjective health complaints (tension, feelings of irritation and headaches) and two questions on cyberbullying, were collected during the survey. Binary and multinomial logistic regression was used to determine the risk factors of cyberbullying and for the association of cyberbullying with health outcomes. Odd ratios (OR) and their 95% confidence intervals (CIs) were reported as the measure of associations.