Parents involvement in students language development : the use of Indonesian language for the first and fourth grades of a primary school in Pidie, Aceh 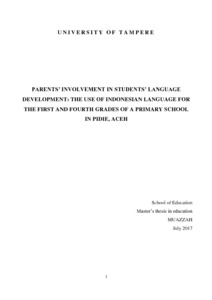 Aceh is one of the provinces in Indonesia which has had an important historical background. The conflict between the Aceh separatist movement (GAM) and the Indonesian government happened around 30 years ago and caused most Acehnese people to live with torture, suffering, and loss of their family members. Nowadays, children who lived through that situation are parents. The aim of this study was to investigate parental involvement related to students Indonesian language ability in the first and fourth grades at elementary level. The study took place in Sukma Bangsa Pidie Primary School by interviewing the parents of 10 students. The data was collected in August and September 2016 in Sukma Bangsa School and the participants houses. The participants were mothers, fathers, and an elder sister of the students, depending on who were more involved during learning at home.

The results showed that parents involvement influences students Indonesian language ability and parents involvement, influenced by the community perspective, family decisions and parenting style, the parents historical background during the Aceh conflict, and the students characters. However, the parents educational background was not related to how parents were involved in their children s learning at home. Furthermore, religion was the dominant aspect influencing parenting style. All the participants put religious education above formal education.