A framework for analyzing playability requirements based on game reviews 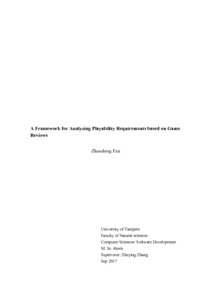 The thesis work includes two parts, literature review and data analysis. Literature referred to playability, game components and game enjoyment was mainly studied. Based on the literature review, 41 game reviews from GameSpot were collected and analysed by grounded theory. As a result, Playability Framework was developed for understanding and analyzing playability requirements. There are three categories of playability, including Gameplay, Representation and Story. This thesis focuses on Gameplay, since most of data belongs to Gameplay. Furthermore, four elements of Gameplay were concluded, including Goals, Gameworld, Avatar and Player. Through analysing the relationships between the four elements, Gameplay are categorized into three groups, Achievements of goals, Game interaction and Game control. In addition, five attributes that highly affect the quality of gameplay were found during the data analysis, they are Variety, Meaningfulness, Fairness, Pace and Intuitiveness. Based on the framework, the steps of analysing player requirements and the form of playability requirements were also proposed. The result of the thesis can help game designers and testers transfer playability issues into playability requirements, so that the issues can be analyzed and tracked systematically.