Local conceptualisations of violence and dialogue in Burundi's post-electoral crisis 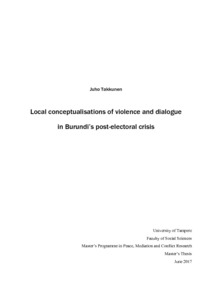 Burundi's current political crisis was launched by demonstrations against President Nkurunziza's third mandate in April 2015 and a coup attempt the following month. It has led to political killings, an outflow of refugees, damaged the country's media and made many opposition and civil society activists and opposition politicians leave for exile. Various international organisations have accused Burundi's government of serious human rights violations.

The political confrontation in the crisis has been formed around the opposition and civil society in exile in Belgium, represented by an umbrella alliance called CNARED, and the Burundian government led by the CNDD-FDD party. The East African Community has attempted to establish a dialogue between the parties but has not succeeded in bringing all the actors to the same table.

Many international actors and organisations have commented the Burundian conflict and presented their analysis of the conflict issues. On the contrary, this study encompasses the local aspect of the conceptualisations of the conflict. It is a pioneering case study on the narratives of violence and dialogue in the political crisis in 2015-17 by the Burundian government, opposition and civil society and their supporters.

The study uses the theory of radical disagreement and the structuration theory to analyse the discrepancies in conflict narratives between the conflict actors. On the methodological level, it uses discourse and narrative analysis. The data for the study was gathered by interviewing politically active members of the Burundian diaspora in Brussels and by collecting social media, news article and video material.