Human mobility and visa policies : the case of North-Western Russia 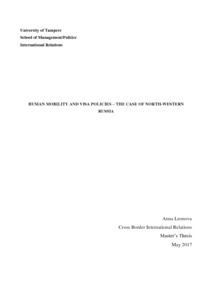 The aim of this research is foster cooperation between regions of Russia and neighboring European countries through the consideration of visa policies. In other words, the goal is to expand cooperation at the borders, where it can affect relations between countries as a whole. This thesis contains an analysis of the situation only on the Russian side of the border.

It is argued that the process of increasing the number of border crossings by citizens from the Russian side has a certain influence on the development of international relations. A positive effect will be achieved with an increase in crossings per person, rather than the overall percentage of the country. The rise of the number trips increases the chances of establishing constructive interaction with the inhabitants of other countries. This is important due to a decrease in interest in cooperation with the countries of the European Union among Russian youth. This tendency was revealed on the basis of an analysis of surveys conducted in the North-West region of Russia.

Furthermore, a second purpose of this research which relates to the research questions is to identify those factors that hampered the increase in visits to Finland and the Baltic States, as well as identifying areas where specific changes could be proposed to optimize the border crossing process. For example, one of the areas identified is a false idea of the difficulty of obtaining a visa, common among people who have never traveled. Accordingly, by providing individualized information about visas, border crossing procedures and other similar actions, it is possible to increase the growth of visits to other countries per person. It is important to provide detailed information even to those people who have not seriously thought about such trips. The thesis shows the need to intensify activities in this direction.

In this thesis, the theoretical framework of functionalism is used, and through this theory all analyses were built. The main research method is a qualitative content analysis, which is used to analyze the surveys conducted among citizens of the city of St. Petersburg and the city of Pskov. The obtained data are coded and divided into several categories based on the theory of functionalism. A certain number of hypotheses which were put forward have found their confirmation; this made it possible to draw the main conclusions.

Thus, based on the analysis of the data obtained, an increase in the number of people was revealed in the area of interest of which the European dimension does not belong. This trend may have an impact on future relations between the European Union and the Russian Federation. To help regulate these changes, the thesis provided an analysis of the current situation regarding the human mobility. With the help of normative documents related to cross-border interactions and a general analysis of the economic situation in the region, it became possible to obtain additional information reinforcement on the issue of increasing border crossings by one person. Based on the results of this thesis, it is possible to conclude that the situation could improve for the better, if the efforts of both sides were combined to further develop cross-border cooperation taking into account the data obtained.