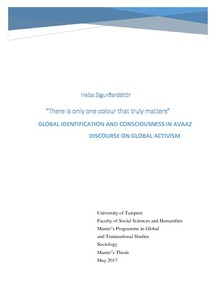 The topic of this thesis is to study how the digital activist movement Avaaz facilitates global identification and global consciousness via their framing and discourse on various social and ecological issues in their campaigns. This case study also examines how members of Avaaz talk about the goals of the organization and their world vision in a global public sphere. By examining such discourses one can discern what kind of a common understanding among peoples of diverse national backgrounds exist.

I will look at the case of Avaaz from the perspective of world society theory and neo-institutionalism, and make comparison to perspectives from social movement theories. One of the main arguments presented is how world culture provides an important impetus for global civic activism in contrast of being simply a question of availability of political opportunities or resources as maintained by some social movement theories.

As a method of investigation, I use critical discourse analysis on texts produced by Avaaz in the form of emails, Internet web pages and comments posted by Avaaz members. As analytical tools, I make use of concepts of scripts, framing and membership categorization to showcase how a discourse plays important role in facilitating global identification and moral justification for global activism.

I argue that Avaaz uses moral frames when highlighting issues for their audiences, in particular through certain narrative structure, vernacular and via images where actors become defined belonging to certain categories that imply moral and immoral actions. Furthermore, the Avaaz rhetoric makes assumptions on the universality of values and norms and of identity and thus appeals to a global identification and a global consciousness. It is through such collective identity that global activism becomes justified as well through certain social imageries of the world that appear through narrative scripts. Furthermore, through utilizing language of inclusion and through offer of empowerment Avaaz frames activism as relevant on an intimate and personal level making global activism as much about the individual as it is about the world. Finally, I argue that Avaaz utilizes epistemic governance in their act of persuasion, that the movement utilizes moral authority which explains in part the discursive power of Avaaz and its appeal to global society. Thus I suggest that the significance of new digital social movements can be understood in the way they circulate and re-inforce certain discourses that tie to world culture. In addition, the act of signing petitions and participating in demonstrations are also performances of morality that rather than actions that are expected to bring about immediate changes.