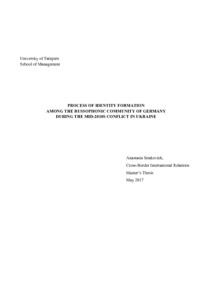 The Ukrainian crisis that has led to an enormous polarization in international relations, creates a special context for Russian-speaking minorities abroad. Today s Russia is claimed not only to send weaponry to the conflict zone, but also to undertake an attempt to undermine the stability of the West. Russian-speakers living in the Western states are accused of being Moscow's 'fifth column'. At the same time, Russian media tell a story of 'aggressive West' that disrespects Moscow's natural interests and should be opposed to. The thesis argues that the Russophones in Germany find themselves stuck between two discursive formations, and this situation finds its reflection in the patterns of self-identification and, therefore, political preferences of the group.

Based on the poststructuralist understanding of identity, the thesis claims that the identification is based on the continuity of discursive acts, with the latter being limited by the existing discursive background. Therefore, I study the narratives present in two main sociopolitical spaces that the group might belong to German and Russian, as well as those (re)produced by the group s individual members and communities. The previous background associated with the 1990s-2014 German representations of the group is taken into consideration, too. I come to the conclusion that the group experienced prolonged othering from the receiving society, which pushed them to the edge of political spectrum. Furthermore, the massive 'integrationist' stigmatization has led to internal divisions within the group.

Throughout the research, it has become clear that the Ukrainian crisis has not changed the previous tendencies. Despite the initial signs of (limited) unification, the internal differences laid during the previous periods were not overcome. In this sense, the accusations of Russophones being an instrument of Russian policy have proved to be false.