The relationship between avatar's capital and player's gaming orientation : a study in Final Fantasy XIV 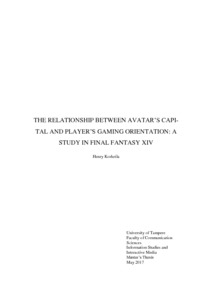 The world's digitalization has changed our lives in numerous ways. Digitalization has changed how people consume entertainment and video games are just one example of this. Persistent online game worlds where a massive number of players can interact with each other around the clock were non-existent two decades ago. Player studies is still in its infancy, because it is not fully understood yet what kind of lives the players have in these online virtual worlds. One way to look at the lives of the players is to examine the types of capitals they have. The players of video games do have, in fact, multiple types of capitals at their disposal in the digital game worlds. In this study, the capitals are re-ferred to as resources available to an avatar in various forms. However, what kind of players have which types of capitals are still largely unexplored. This study attempts to find an answer to that problematic issue.

This study investigates the relationship between avatar's capitals and player's gaming orientation. This study employs Bourdieu's theory of capitals (Social, Economic, Cultur-al and Symbolic) and Yee's Motivations for Play in Online Games scale to investigate the relationship between avatar's capitals and player s gaming orientation via an online survey (n = 905). Aimed at players of a Massively Multiplayer Online Role-Playing Game, Final Fantasy XIV.