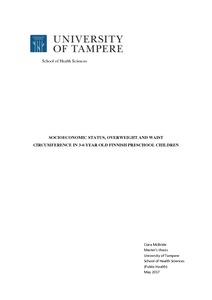 Background: A predominantly inverse association between socioeconomic status (SES) and child overweight exists in Europe. In Finland, little is known regarding the socioeconomic gradient of overweight in young children, or the role of gender in this association as overweight prevalence has not been nationally monitored.

Aim: To examine the association between SES, overweight and waist circumference in Finnish preschool children (3-6 years) and explore the role of gender.

Methods: This study is conducted under the Increased Health and Wellbeing in Preschool (DAGIS) project. As part of a cross-sectional study conducted in 2015/2016, anthropometric measurements were taken from 811 preschool children and the SES of these children measured through parent questionnaires. Overweight was calculated according to Cole and Lobstein’s BMI child cut-offs and waist circumference measured. SES was measured through a variety of educational and income variables, including combined SES which comprises of education and income measures. Logistic regression and analysis of covariance were used in the analyses to study differences in overweight (including obesity) and waist circumference between SES groups.

Conclusions: The prevalence of overweight was found to be low compared to other European countries. Furthermore, contrary to predominant findings from other Western European countries, no inverse associations were found between SES and child overweight in this study. Rather, varying associations between some SES indicators and overweight/waist circumference were found and they differed between girls and boys.