Effect of complementary feeding of lipid-based nutrient supplements on appetite in 6- to 18-month-old rural Malawian children : a randomised controlled trial 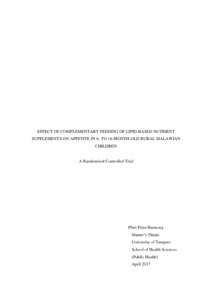 Background: Undernutrition in children is still widely prevalent in Malawi and elsewhere in sub-Saharan Africa and South Asia. In most developing countries, high prevalence of undernutrition is attributed to inadequate dietary intakes among other causes. Reduced appetite in children has been shown to markedly contribute to low dietary intakes. Some studies have documented improvements in child appetite following supplementation with various micronutrients, some of which, are contained in Lipid-based Nutrient Supplements (LNS). As such LNS hold a promise to improve appetite in children.

Data and methods: The present study is a sub-set of the International Lipid-based Nutrient Supplements (iLiNS) DYAD-M trial in which 869 pregnant women were randomly assigned to receive either LNS, Multiple Micronutrients (MMN) or Iron Folic Acid (IFA) in rural Malawi. Children born to these women formed the sample size for the present study. Children born to women in LNS group, received two sachets of LNS-20gM (20g of LNS) daily from the age of 6 to 18 months while those born from women in either IFA or MMN received no supplements. Independent sample t-test was used in order to compare the proportion of days during which anorexia was reported between the intervention and control groups.

Conclusion: Provision of SQ-LNS to IYC in resource-insecure settings during early life yields modest improvements in appetite as evidenced by a decrease in the prevalence of anorexia. This study also suggests that the effect of SQ-LNS in improving child appetite gets significant as the children grow older.