From Finland to Ukraine: foreign policy sharing across time and space 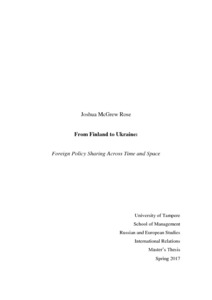 With the annexation of Crimea in the spring of 2014, the topic of the Finnish model reemerged in the area of International Relations. Notable experts in the area of International Relations, such as Zbigniew Brzezinski and Henry Kissinger, have recommended finlandization as a possible solution for Ukraine in its current conflict. This thesis aims to examine how Finnish experts relate to the Finnish model and its recommendation for other countries, such as Ukraine.

Interviews were conducted with Finnish experts in history and foreign policy. This thesis used these interviews to first determine what kind of an epistemic community exists in Finnish foreign policy. Having determined this, this thesis then analyzed the narratives of the interviewees using the method of narrative analysis to discover how the interviewees narrated the topic of the Finnish model and its applicability outside of Finland.

The analysis of the interviews showed that a strong epistemic community in Finnish foreign policy exists. Furthermore, the data revealed that the narratives used by the interviewees varied only slightly when discussing the Finnish model. When discussing the Finnish model as a possible solution for other countries, the variations in the narratives increased, though, the final results showed that there was a certain amount of consensus, even amongst the diverging narrative groups.