Everlasting struggles to articulate the Arctic : Discourse analysis of Finnish, Russian, and Singaporean governmental speeches in the 21st century 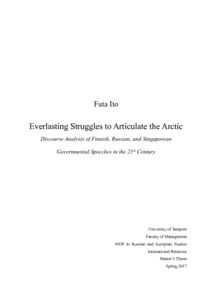 Master's Programme in Russian and European Studies
This publication is copyrighted. You may download, display and print it for Your own personal use. Commercial use is prohibited.

The Arctic has attracted global attention as never before in recent years, which makes it vital to study this region from as many different angles as possible.

This thesis attempts to deconstruct Arctic discourses and Arcticness of Finland, Russia, and Singapore by applying poststructuralist discourse theory and analysis informed by Laclau and Mouffe. More precisely, it aims to identify the process of how the three states have written the space and filled the empty signifier called 'Arctic' to become primary subjects therein. They are selected as the empirical cases because of their unique history concerning the region, and also because of their representation of three distinctive subject positions in the today's Arctic discourse: the Arctic coastal, non-coastal, and non-Arctic states. Thus, comparing and contrasting them in detail would be highly interesting and valuable, which has rarely been done in the field of IR before.

As research data, a total of 74 'texts' have been gathered from the official websites of the Ministry of Foreign Affairs and the President's Office of the respective countries. They consist mostly of political speeches by political leaders at globally acknowledged premises such as the Arctic Council, the Arctic Circle, and the Arctic Frontiers, to name a few. The texts have been denaturalized with the help of a theoretically-informed and tailor-made checklist for the study.

The research conducted reveals that Finland, Russia, and Singapore have articulated the three certainly distinctive Arctics and Arcticness in such ways as to suit to their specific needs and identities. However, this is not to deny that they also have several key aspects in common, and both the hegemonic and counter discourses have equally impacted on them. A critical gaze and knowledge offered by this study can help the general public, scholars, and policymakers to think outside the box and to reconstruct different Arctics if necessary in their minds.