Governing environmental security in the Arctic : the perspective of the Arctic Council on climate change, fossil fuel exploration and shipping operation 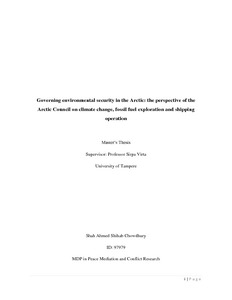 Global climate change is one of the most pressing environmental issues in the history of mankind and like any other parts of the world, the Arctic region is also under a severe threat. Climate change is already causing noticeable impact to Arctic environment, which may contribute to further complicacies inside and outside this region in the future. On the other hand, the melting of sea ice due to climate change has unveiled opportunities for fossil fuel exploration and shipping in the Arctic. As the new record for global warming is being observed regularly, the Arctic ice sheet melting will most likely continue in upcoming years and the Arctic environment will be encountering a far more complex version of the current situation. This study identifies the Arctic Council as the most influential actor in the Arctic governance and discusses the contribution of this intergovernmental panel to the region's environmental security, primarily, concerning the issue of climate change. Qualitative content analysis of the nine declarations of the Arctic Council from 1996 to 2015 not only reveals its achievements in the field of climate change but also discusses its role in the sectors of fossil fuel exploration and shipping operation in the Arctic. Furthermore, this study indicates about the Arctic Council's lack of significant contribution in the fight against climate change and discusses about strengthening its role in the wake of new challenges.