"Sometimes I just want to show how pretty sandwich I made" : the self-presentation habits of Facebook users 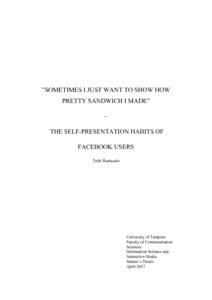 The objectives of this thesis were to study the self-presentation habits of Facebook users, and to assess how conscious of these habits the users are. In addition, the effect of other Facebook users on the self-presentation process of an individual user was studied. The empirical data for this study was collected via an online survey. The survey was distributed through Facebook in February 2017 and it received a total of 84 responses. The majority of the respondents were from Finland, and among 25-44 years of age. The quantitative data was analyzed by examining the answer percentages and averages, and qualitative data by content analysis. For the data analysis, the ideas of symbolic interactionism were applied.

As a key finding, the results of this study indicated that self-presentation on Facebook is a conscious action and that people spend time controlling their Facebook presence. Most of the actions are performed on purpose, and the respondents of the survey had clear ideas of the actions they want and do not want to execute on Facebook. The results also suggest that it is important to present oneself in a favorable way and that the users are trying to idealize the presentation of self. Clearly, the respondents neither want to look bad or feel embarrassed on Facebook. They also described how they tend to leave things out because they do not want to be associated with certain subjects, matters or people.

The influence of other users was clearly noticed, and was indicated to have both positive and negative aspects. On one hand, the posts made by other users were not appreciated if they presented the affected user in an undesirable way. On the other hand, the posts made by other users made the respondents feel happy and a sense of belonging to a group. Other Facebook users are perceived as an audience, and the respondents paid more attention to the content they post depending on who the recipients are. Friend requests were also thoroughly thought before accepting them, implying that the respondents do not want to associate with complete strangers or certain individuals.