How sixth grade CLIL students see themselves : a comparative study 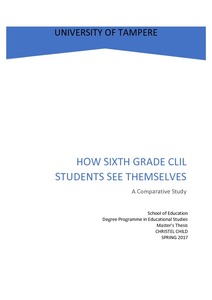 The main aim of this study is to find out if sixth grade Content and Language Integrated Learning (CLIL) students have a different sense of identity compared to Music-line and ordinary Finnish (un-emphasized) students. A second aim is to discover whether the sixth grade CLIL students are aware of the benefits that learning a second language will have on their future. This study was conducted at a primary school in a small town in Eastern Finland, over a two-year period. The theoretical framework consists of CLIL theories, identity theories and post-culturalist theories on language learner identity in second language acquisition. As the term identity is broad and current theories do not all agree on one single definition, this study has limited identity and language learner identity to the theoretical framework provided. Three open-ended questions were used to collect the data, which was analysed using content analysis. Results of this study show that CLIL students express who they are in a more multifaceted and complex way than their non-CLIL peers and they also perceive a greater number of benefits to studying in their line than their non-CLIL peers. These benefits include benefits regarding work in the future, benefits to learning, benefits to living abroad in the future and benefits to their intercultural communication skills. These findings help demonstrate the importance of CLIL education on the development of both identity and language learner identity, even on students as young as sixth graders.